Find this article at:
go.ncsu.edu/readext?515397
— Written By Brian Parrish 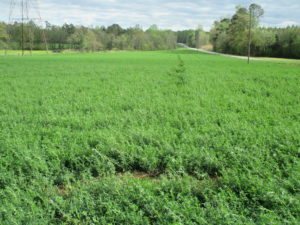 Will alfalfa grow in Harnett County? We currently have three farmers that are growing alfalfa in the Harnett County NC area (Coats, Erwin, and Duncan) and the crop is doing very well in all three locations. Two of the growers target the (high quality) horse hay market. They sell small square bales as a valuable cash crop. The third grower is baling the alfalfa as haylage to use as a protein supplement for his cattle herd during the winter. The alfalfa haylage should help save the cattle producer $ money based on what he has been spending on protein supplements in previous years. It has amazed me how well the alfalfa has grown here during the last two growing seasons.

How is the quality of the local Alfalfa hay? Last year I was called out to help test hay shipments coming in to a large horse boarding operation. I mentioned to the owner that we have some local alfalfa growers and he said, “I have some of the local alfalfa here in my barn” so we tested it as well. The hay test results showed that the locally grown Harnett alfalfa was just as good as the alfalfa coming in from other states and in many instances the local hay was better in quality. High quality alfalfa hay has Crude Protein (CP) levels between 18% to 23% with acid detergent fiber (ADF) below 30%. The Harnett alfalfa tested 24% crude protein with acid detergent fiber ranging from 25.90 % to 27.64%, which is very high quality alfalfa hay.
Can alfalfa produce its own Nitrogen (N)? Alfalfa is a legume and has the ability to produce between 250 to 400 pounds of Nitrogen (N) per acre per year. Alfalfa can basically allow producers to grow their own nitrogen (N). This can be a big deal from a financial stand point, especially when considering the high prices of Nitrogen in today’s market. Also, not all forage and hay producers have access to lower cost litter and other organic sources of nitrogen (N). Can alfalfa be grown in combination with Bermuda? Growing alfalfa with bermudagrass can have many benefits in addition to improving hay and forage quality. Bermuda mixed with alfalfa allows the alfalfa to dry faster. Alfalfa grown with bermudagrass also retains more leaves and has less ash content, because the grass sod minimizes soil contamination. The alfalfa bermudagrass mix also has a degree of built in risk management. When the alfalfa eventually plays out the bermudagrass remains.
As with any crop there are places where alfalfa is not a good fit. Alfalfa needs a well-drained soil so that it can send its roots deep into the soil profile. Wet and poorly drained soils are not a good fit. Alfalfa also needs a soil pH of 6.5 or greater. In addition, alfalfa needs the subsoil pH at (8 to 24 inches) to be above 5.5 pH. Alfalfa also requires significant (P) phosphorus and (K) potassium fertility of the soil. If either is low, problems with establishment can occur. Alfalfa tends to like and do well on clay soils but sandy loam soils have proven capable of producing alfalfa. Another thing to watch out for is soils that are too sandy. Avoid soils that are classified by soil type as “sand” and have less than one percent organic matter. Herbicide residues can also be a problem for alfalfa. Hay or former crop field herbicides can remain active in the soil for months and can damage alfalfa seedlings.

We also have a few other email lists you can subscribe to.